if you are a new team a deposit is required (minimum $50 Through our PayPal at LIFFL2@aol.com & click on the Player Zone menu and select “make a payment”

We may have a few rain showers today, but all games are on and will be played as scheduled 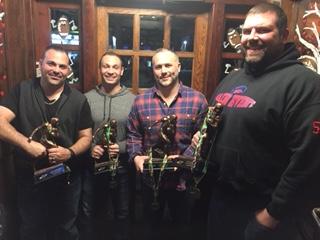 Jimmy Barbarise– Started playing in the LIFFL in 1989 when I played my first game. Starting as “Winner Sports bar” they won the title in their very 1 season.! I was my teams captain, coach, WR and FS. He played and won championships on other teams such as Mike’s Place and others. He eventually wound up on Darkside and won a couple more. His last was in 2001. Jimmy was featured in Newsday being interviewed by Calvin Watkins on the LIFFL championship Game at Giant Stadium.Jimmy played during the Golden Era against some of the best teams in the country every single week (Park Bench, Grazio Carting etc)

Mike Lupa-Over the last 12 years Mike played 8 man A, B, and C for the Phantoms and the Strong Island 49ers. 5-Man B & A for Cash Butter Nuggets, Bogarts, and the 49ers. Mike was the team captain for the Phantoms where he led his team to (3) 8 man championships where he was named MVP in all three Super Bowls. In winning those three championships in B he was voted as offensive player of the year due to his quarterback play. He also won a 8 man A full rush championship with the Strong Island 49ers. He has also won (8) 8 man tournaments. Lastly he has won (2) 9 man A championships with the Strong Island Bulldogs. Mike has played qb, running back, wide receiver, and defensive back in his 5/8/9man career. In addition to the Fall and Spring leagues he has won a night league 8 man championship as well. All together between 8-Man & 5-Man, Mike has won 30 Championships & 6 MVP’s

Dave Kleet– coach/RB/LB for the past 20 years. He has won tournament championships, but being one of the toughest and physical players in the league for almost 2 decades, and running a Kleet Lumber who was a team that was always at the top of the standings in the high divisions, Dave never won a LIFFL Season Championship. A few years back Dave told the Coach of the Purple People Eaters how much he hated one of the players on Purples team.. Which of course led to them merging teams. After taking another crack at 9-man a couple seasons ago, Dave joined back with Purple People Eaters last Spring. He got hurt that season and did not play, and Purple People Eaters won the Championship.

Justin Crisci- OL/DL- Justin started in the LIFFL in 2004 with the Clippers. The Clippers had a long run off success in the league winning multiple championships, and dominating the 9-man division. That is because of their line. Justin is a versatile linemen that can play Center or anywhere else on O & D-Line and will dominate anyone in front of him. Justin also represents the LIFFL on the national circuit playing with teams like Main Event. Along with all of his championships, most Recently the Fall 2017 9-man championship with the Main Event Clippers, Justin was honored by the USFTL at the Nationals as being selected as an All-American on the Offense. Justin is not only a dominant player, with multiple awards, he is also a class act on the field. 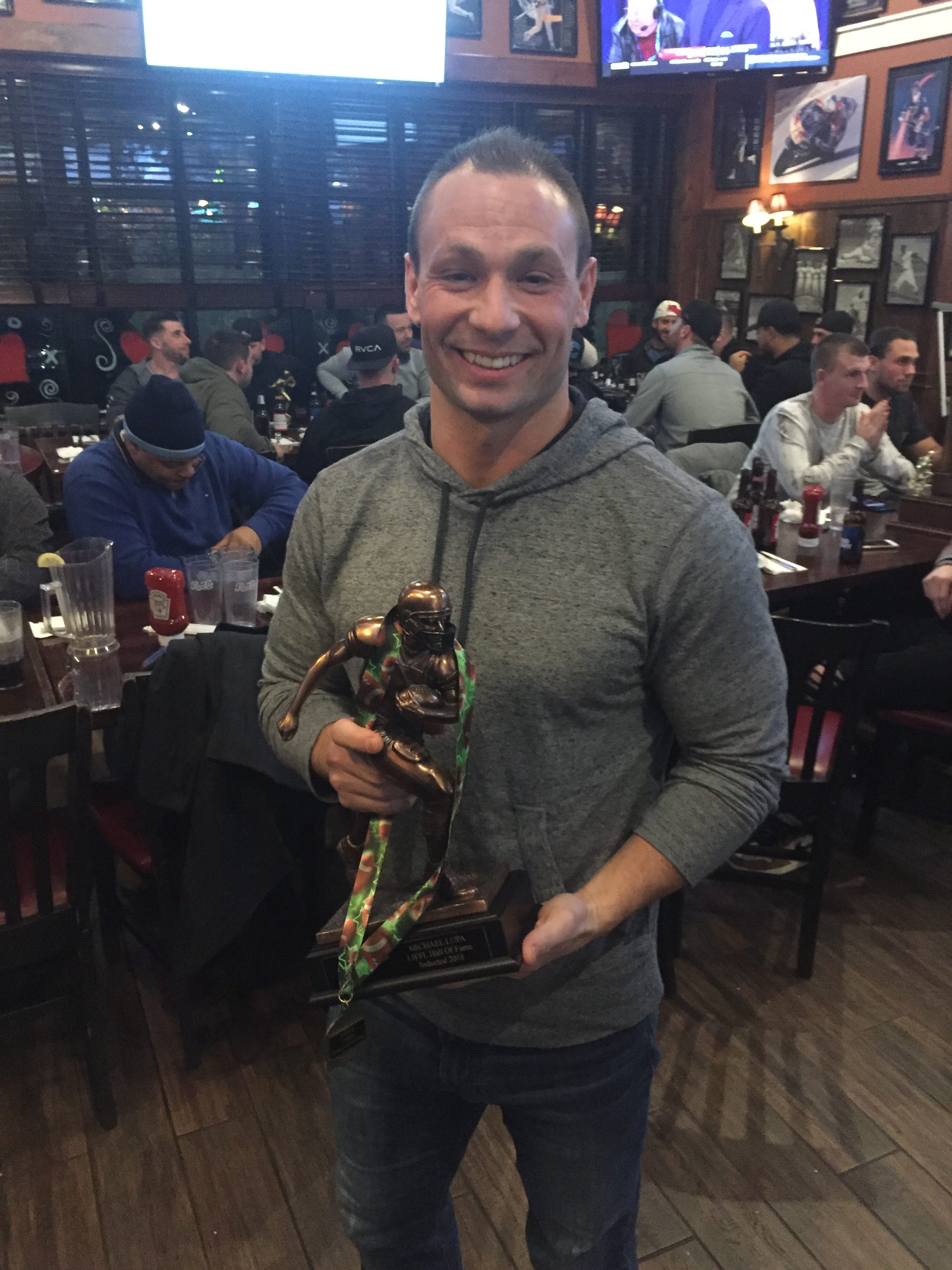 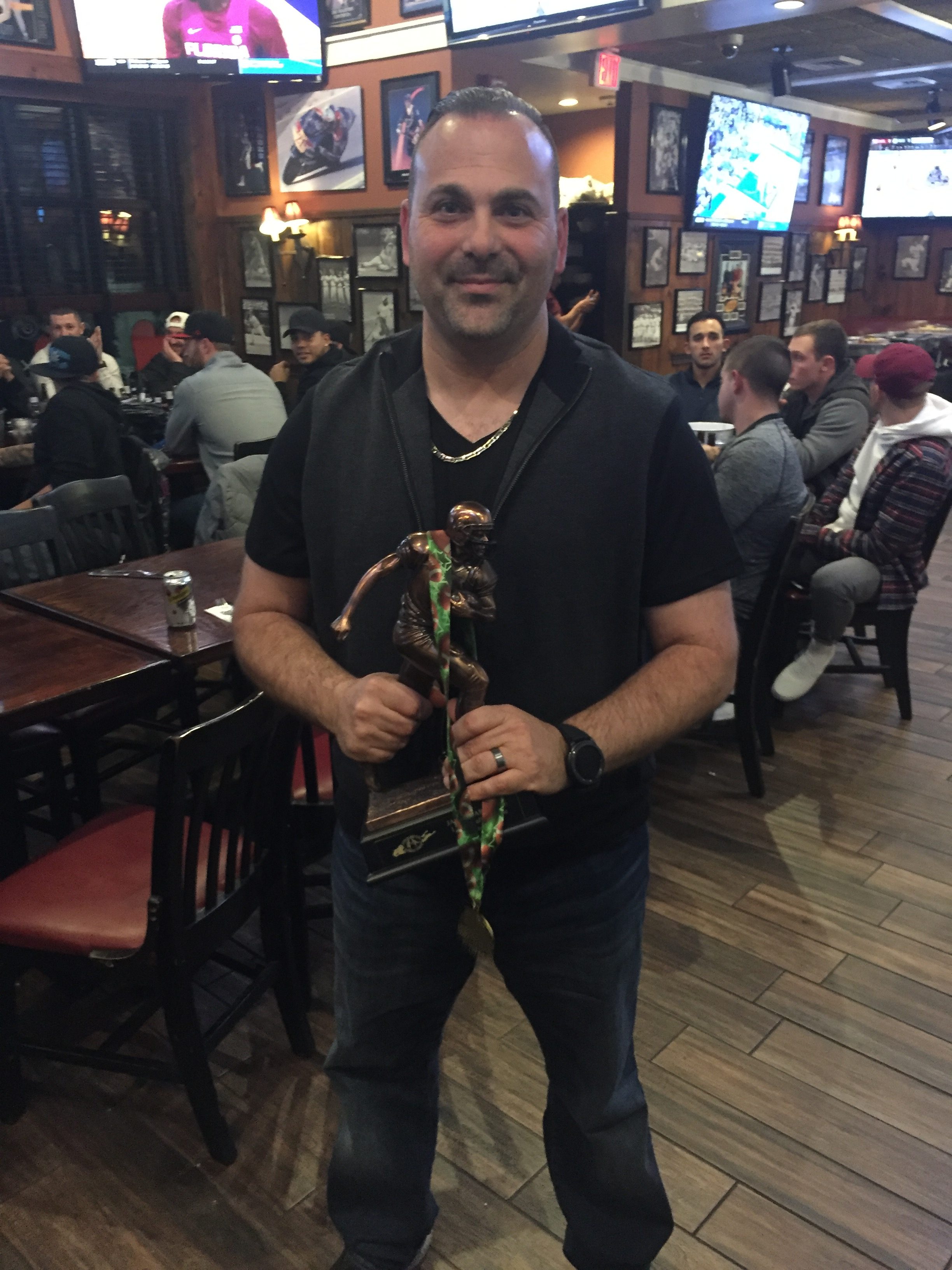 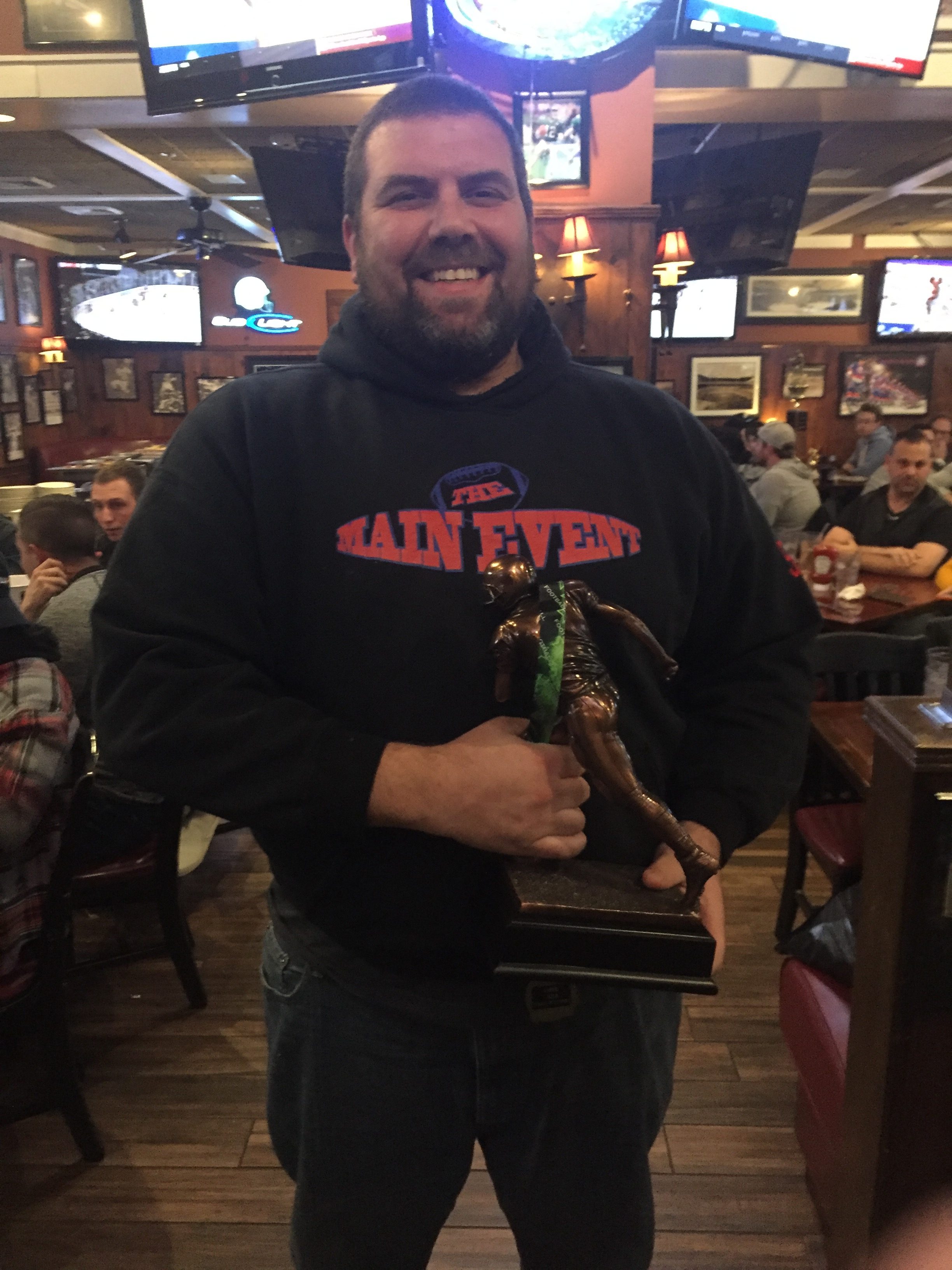 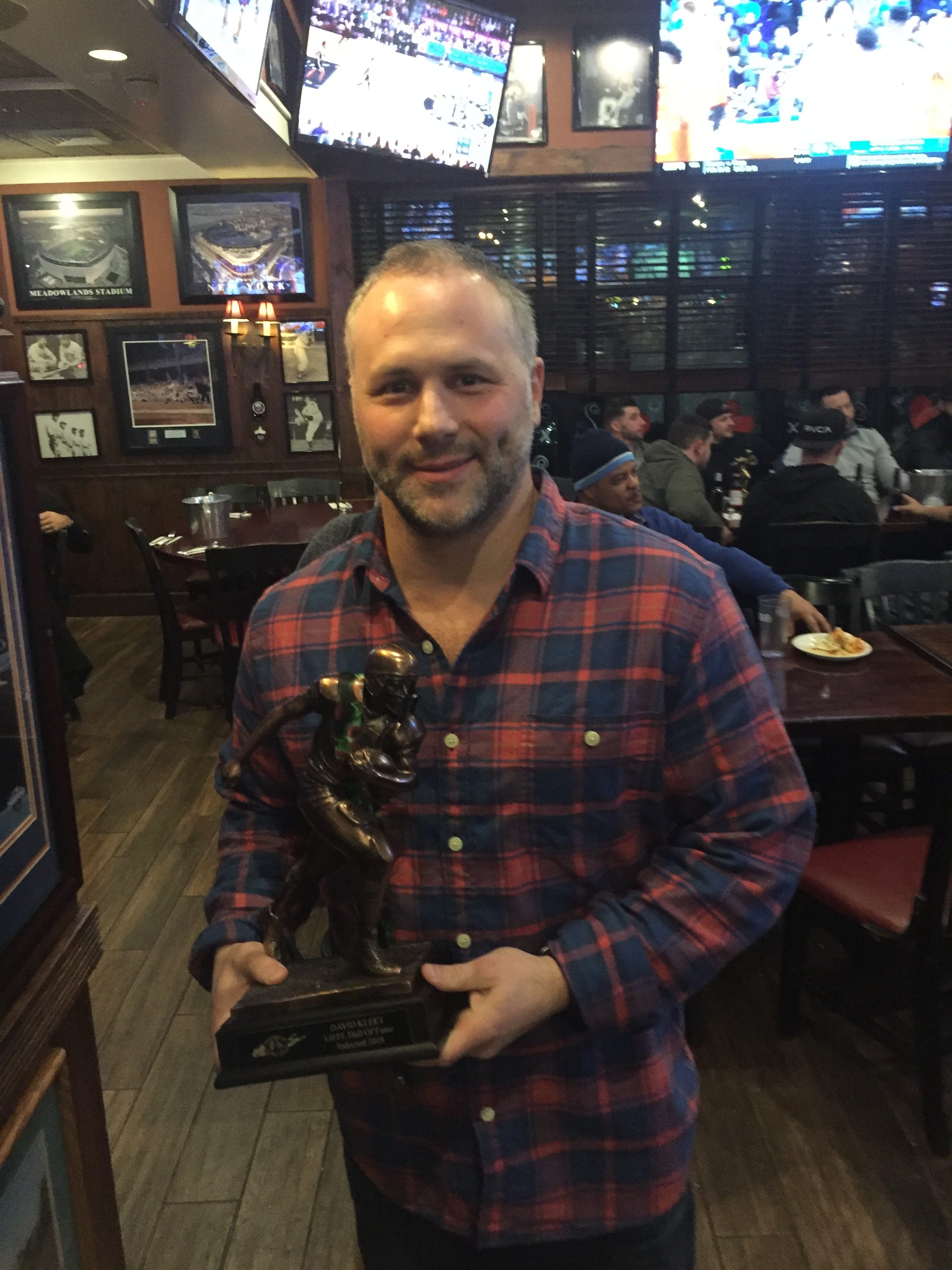 Click Here to Fill out (or Print) a Registration form: https://liffl.com/registration/

FORMAT: 1st Round: Everyone plays 2 games, those who don’t lose 2 move on
to Round 2 which becomes Single Elimination

You can Pay Via PayPal by clicking “Make a Payment” Under the Player Zone Tab. Or E-mail LIFFL2@aol.com for other options.

3) Existing LIFFL Teams can fill out the form and pay CASH at the field the day of the tournament. ($100 penalty if you confirm your schedule and do not show up)

To register your team, Please fill out a form and leave a deposit ($50 minimum) to reserve your spot!
FILL OUT A REGISTRATION FORM HERE:
https://liffl.com/registration/

. Please include your preferred start state in the comment section

PAYMENT OPTIONS: You can leave a deposit and pay the balance in cash at your first game, or you can pay in Full by either of the following methods:

If you are looking to build a team and need players: E-mail us at LIFFL2@aol.com and we will send you a Free Agent list

2018 LIFFL FALL SEASON REGISTRATION INFO
We have over 30 Fields all over Long Island. That allows us to get almost all games over in time so you can get home and watch the NFL!! Time and Field requests are on a 1st come 1st serve basis! Don’t wait until the last minute!
Click Here to Fill out (or Print) a Registration form: https://liffl.com/registration/
To complete your registration, after you fill out the registration form you can pay your league fee via credit or debit card here: https://liffl.com/player-zone/make-a-payment/ (Even a small deposit($50 minimum) will reserve your spot.

Weeknight Fall League will now be a 6 Week Season. We have heard your feedback and understand that the Play-Offs go to far into the Winter and Cold Weather.
Weeknight 5-Man (A & B Division): $400(Tuesday thru Thursday)-Triple Threat Flags
Weeknight 8-Man- $600
Weeknight League Awards: Cup & Individual trophies at field

TO REGISTER: 1)Email (liffl2@aol.com) to reserve your spot & pay cash at the field.
2) Mail form with check to “LIFFL” PO Box 518, Bethpage, NY 11714. 3) Register here: https://liffl.com/registration/ and pay via Pay Pal. Select “Make a Payment” Under the Player Zone Tab

REGISTER YOUR TEAM ONLINE AT: https://liffl.com/registration/

After you fill out the form, you could leave a deposit with your credit card via Pay Pal. You can find our link on the website under the Player Zone tab. Select “Make a payment”. Or you can just use the link below. You can pay the whole fee or just a deposit ($50 minimum)

In the comment section of the registration form, please let us know which start date you prefer.

5/13- All Games to be played as scheduled. However, if a field becomes damaged or unplayable throughout the day we will update your team.

8/29-ADULT LEAGUE: ALL GAMES TO BE PLAYED TODAY AS SCHEDULED

YOUTH LEAGUE: All games will be played today as scheduled. However, we’ll need to watch the weather for games scheduled later in the afternoon 3-6pm so check back then if you’re playing 3-6pm.¢


Stay in the Huddle